It starts months before. Chefs and culinary personalities across the country put on food and drink events in Chicago all year. Then comes the big weekend – that’s now.

A good time was had by all. And I hope you’re out there today partaking of the expansive array of food and drink options in Chicago’s biggest culinary celebration. If you’re not, see if there are any tickets left for tomorrow.

If you’re feeling flush, get a ticket for the Grand Cru. An unforgettable crush of fabulous wines and gourmet tastes.

A fun promotion’s going on at the Hard Rock Hotel Chicago. Every morning at 8 am, check for your name on the Facebook and Twitter pages of its on-site nearly-four-star restaurant, Chuck’s, A Kerry Simon Kitchen. If your name is listed that day, all you have to do is bring a friend, show up with a photo ID to prove it, and get a free meal and soft drink for yourself (your friend pays or you can split it).

Dubbed the ‘Say My Name’ offer, it’s happening at Chuck’s and Hard Rock Hotel every day. For example, today’s name is SARAH. Everyone named SARAH who comes into the restaurant today (with ID and paying friend) gets the freebie.  The offer is valid all day (restaurant is open until 11 PM.

Pepsico put on a preview party the other night with some of Chicago’s sports, art and culinary elite – including Charles Tillman, Graham Elliot and five local artists for the “Sierra Mist Exquisite Collaboration Billboard Project.”

During the preview, sports giant Charles Tillman shared his passion for the arts and his thoughts on the project. Graham Elliot prepared and served dishes inspired by the soda and by the billboard, while DJ Arkitek (from Studio Paris, theMID, UNDERGROUND, etc.) cranked the beats.

The final product is a billboard you can preview at the party tonight – and that you’ll soon see throughout Chicago.  Chef Elliot will serve his inspired food and drinks. Check out this exclusive interview with Chef Graham Elliot about the #sierramistcollab.

Graham arrived cool as a cucumber, dressed in his, as he described them, poured-into-them-can’t-get-any-tighter lime green pants, and rarin’ to go. We sat down just before the opening night of the Sierra Mist art-food-music Collaborative Project to relaunch one of PepsiCo“s flagship products, Sierra Mist. Removing his trademark white-framed glasses. he fired off quick and sure answers to a few questions about his partnership in this project.

1. How did Sierra Mist choose you to work with them on this?

The idea of showcasing the synergy and relationship between art and food – how it all comes together – I always try to be at the forefront of that. I don’t want to say I was the obvious choice, but I do believe in it. I take my culinary team to the museum to get inspired by color and shapes. And I believe nothing is more important than the journey to find your own voice. You never want to copy.

2. What has been the most fun about this partnership?

Having the artistic freedom to come up with these dishes. It would be easy [for Pepsico] to say it has to be this way, it has to be super user-friendly. Instead, I’ve had carte blanche. If I want to do something with lime and coconut with citrus accents, that’s okay. The fewer parameters set, the more creative you are allowed to be.

3. What has been the biggest challenge?

To have all this freedom! You want to do something because you want to reach an audience. But you just want to be sure people will like them – you don’t want to be so artsy that you’re just out there.

4. Will your Bistro be featuring any of the dishes you’ve created and for how long?

Yeah, maybe the soup – it’s coconut-cauliflower with lime. As we get into the colder weather something like that would be good. It will stay on the menu as long as people keep ordering it.

5. What would you like to tell readers and other chefs about using Sierra Mist (or any soda) in cooking?

When you look at soda, it has a mouth feel, this effervescence, that works well with cocktails. Then there is the flavor of the soda itself. Sierra mist has a lemon-lime flavor – and I think lemongrass, ginger, cilantro. I think Thailand. I think cranberries – cooking them down and reducing the soda to make a glaze.

Just like at home, you try to unlearn things from the past, and never turn your nose up at new ideas.

I can tell you this: I didn’t get to taste the soup, but if the cranberry dipping sauce he made that night is any indication, I can’t wait to try that soup for what I know will be an intense flavor hit. Join the conversation – #sierramistcollab – and get to the free closing night party tonight! You’re invited.

Are your friends always asking you to mix the cocktails at parties? Are you the one they call on for new and exciting cocktail ideas? Thanks to the House of Bombay, you’ve got a brand new taste in gin to play with.

Bombay Sapphire has been around f 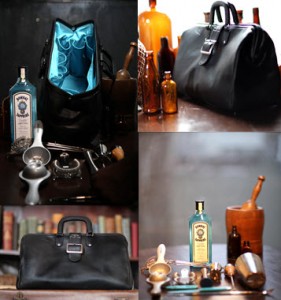 or 25 years as a superpremium London Dry Gin choice. But now comes Bombay Sapphire East, just being introduced in the U.S. It favors the flavors of Asia – infused with crisp Thai lemongrass and spicy Vietnamese Black Peppercorns. I made myself a Gin & Tonic with it the other day and was astonished at how exotic and refreshing it tasted.

And while you’re at it, here’s an idea on how to become a modern-day Paladin – have bar bag, will travel. If you’re in the market for a showy, classy set of bar tools you can transport as needed, check out the Barking Irons Bartending Bag ($495). It was inspired by Bombay Sapphire and features that trademark blue bottle color in the waxed lining.

Build with ice in a Collins/Highball glass. Top with club soda. Garnish with peach slice and lemon twist.

Stir the ingredients over ice. Strain into a lowball glass with a large chunk of ice. Garnish with an orange slices.

As you will probably notice from watching the myriad of (or just myriad, as you prefer) cooking shows on television, chefs tend to use a generous hand when salting their dishes. I do, too.  Do you? My daughter says she can’t seem to duplicate my most delicious dishes – and thinks it’s mainly because she doesn’t put enough salt in them.

Read an article this morning entitled “The Great Salt Divide” on MedPage Today. They interviewed a number of doctors and nutritionists on the role of salt, especially for children, in overall health. Some experts spouted the usual bromides about consuming less.  One made an interesting observation about the potassium-salt balance being an issue:

“In fact, more recently it has been shown that not only is too much salt dangerous but too little salt may also be a concern. Plus, those to [sic] eat too much sodium may not eat enough potassium. Potassium levels that are too low are associated with more adverse cardiac outcomes.”

People. listen to your doctor if you are at risk. But I submit the following information for your consideration:

Selected items of nutrition in a 1 oz. serving of potato chips:

The government says adults need 4.7 grams (4700 mg) of potassium a day.  If my math is right, that means the chips have almost 7% of your daily requirement. That banana you were virtuously thinking about eating offers only just under 9%! A shockingly small difference, isn’t it?

And the recommended level of sodium is 2300 mg per day, which makes the chips not even 10% of that.

Now, since yogurt is also high in potassium, make a dip with it. Greek nonfat tastes great, but regular, full-fat yogurt is measurably higher in potassium (same with milk, by the way). My favorite dip is spicy – plain nonfat Greek yogurt with a generous squirt of sriracha. Dip away – and voila! You’re upping your potassium nicely with your salty chips.

I’m just kidding. This is a food column, not a nutrition source.

And I really do love my chips ‘n’ dip.

How do you judge the excellence of a steakhouse? Quality of the meat, certainly. The sides matter, of course. But in some cases, more than the food sets one place above another – ambience, wine pairings and service.

That’s where David Burke’s Primehouse, located in The James Hotel at 616 N. Rush St. , stands out. If all the wait staff are as knowledgeable and attentive as was Bryan, our server on a recent visit, this place gets nearly five stars. Plus the wines they paired with our food were truly exceptional. The first one, for example, was a blend of their own vintages that rated a solid four stars.

Primehouse occasionally offers a prix fixe menu with wine pairings at an attractive price compared to ordering a la carte. Once you review the regular menu and look at what you would have been paying, you realize just how attractive the package is.

At any rate, the Primehouse folks select the menu to showcase some of their most popular items. The appetizer, Surf & Turf Dumplings, takes the prize for imaginative use of ordinary ingredients. Two little dumplings – really, deep-fried dough-covered-fillings-on-a-stick – come out beautifully displayed on a pair of square pristine-white plates – set off brilliantly by the restaurant’s subtle mood lighting.

And then comes the taste. Layer upon layer of flavor jumps out as you bite into each dumpling – one made with lobster and roasted lemon chutney, and the other with meltingly tender beef short rib meat seasoned with pickled red onion and spicy mustard. The dish was reminiscent of the finely wrought, multi-layered-flavors in certain Asian delicacies but with a distinctly North American weight to it.

Next came an arugula salad full of almost-bacony flavor from the house-smoked-over-applewood truffle tomatoes, set off with pine nuts and coated lightly with a creamy goat cheese fondue. Nice combo. Especially enjoyed the slight bitterness of the greens with the creamy smoothness of the dressing.

We were taken aback when Bryan delivered the next plate. Three very large chunks of seared, rare ahi tuna sat atop a vegetable mix consisting of preserved fennel, bell peppers, black olives and a few green beans. A more than generous serving of an intriguing combination, though not a favorite for either of us.

Next, the piece de resistance. The auxiliary server arrived with a large char-grilled steak. Bryan was concerned that it might be overdone (we’d requested one serving medium rare and one medium well). We appreciated that he asked to have it taken back so the chef could confirm it was properly cooked to order. While we waited, Bryan explained this is their most popular steak – the bone-in 55-day dry-aged ribeye, and that it hangs in their own dry-aging smokehouse for that many days before it’s sent to the grill.

The steak came back from the kitchen confirmed, and the auxiliary server carved it for us, first in half, and then in slices, giving each of us pieces that conformed to our wished-for doneness. Sides included an aluminum basket of French Fries seasoned with truffle oil and melted Asiago cheese, and a generous helping of Roasted Mushrooms seasoned with shallots, sherry vinegar and herbs and served in a sizzling oval skillet.  While none of these dishes reached beyond good, they were nicely prepared and flavorful.

Throughout the meal both Bryan and the sommelier kept us in generous tastes of the selected paired fine wines. Bryan was also kind enough to write out the list of wines for us:

I’ll be back when this fabulous special is available again.