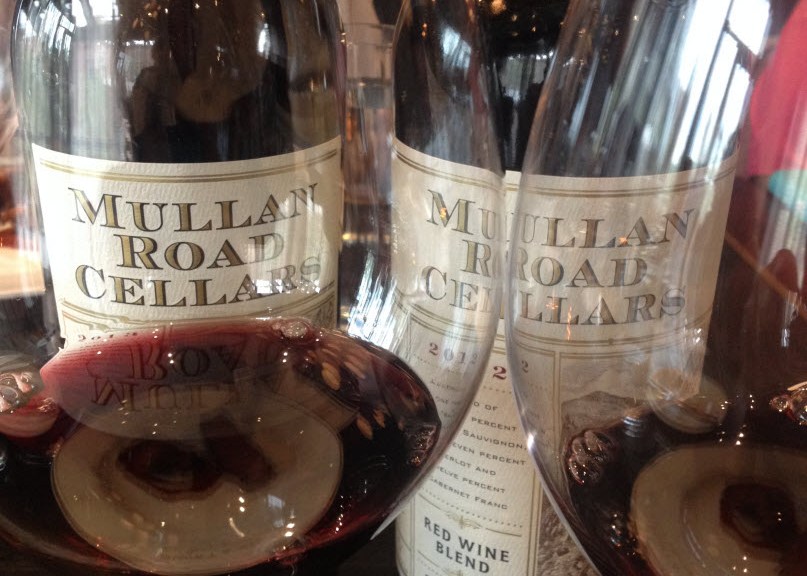 It’s unusual to find a winemaker – someone whose name is already associated with a justly famous brand – setting out to create another completely different brand. But Dennis Cakebread, long associated with his namesake wine brand Cakebread Cellars, came to Chicago recently to introduce and promote his new wine brand, Mullan Road Cellars out of the Columbia Valley, WA area.

Dennis undertook to showcase his new products at hot new restaurant location, Swift and Sons, 1000 W. Fulton Market in West Loop. This Boka Group affiliate undertook to open for lunch – they don’t usually – to help Dennis Cakebread showcase his new wines along with a few from Cakebread. Dennis takes a warm and folksy approach to touting his products; it was a pleasure hearing his stories about the winemaking life.
The Cakebread Chardonnay a 2014, a 4-star beauty, went perfectly with the butter-poached king crab leg set off with a dribble of miso sauce and a slice of preserved lemon.
Then came a couple of slices of roast chicken – gorgeously succulent and tender – with succotash and bacon lardons, served with an extraordinarily lovely Pinot Noir from Cakebread. We give a rare 5-star rating to this Two Creeks Pinot Noir 2014. The wine is available retail at around $40 and, for the times you choose to spend that much for a bottle of wine, this would be a great one to invest in.

Next, a narrow but thick slice of medium-rare, firm-textured rib roast came out accompanied by chanterelle mushrooms in a bordelaise sauce. For this course Dennis presented two Mullan Road Cellars reds blends, from 2012 and 2013. Their typical  blend is composed of Cabernet Sauvignon, Merlot and Cabernet Franc.  The 2012 was delightful; Wine Spectator gives it 90. The 2013 tasted somewhat tart at first, but smoothed out after it breathed for a while. It’s certainly a wine worth watching. Both vintages are on the market at a retail price of around $45, give or take.

Those who stayed to sample the Blackbottom Pudding dessert – multiple layers of black cocoa crumble, baked dark chocolate mousse, milk chocolate pudding and white chocolate sorbet – raved about it afterwards. From the description, that dessert alone sounds like enough incentive for another trip to Swift & Sons.
Mullan Road Cellars’ biggest distribution for export so far is in Canada, with the Caribean second in line, then Korea, Japan and Hong Kong. Look for more from this brand. And Swift and Sons did a stellar job with the pairings to create a memorable occasion.

P.S. Might want to try the bar, too. Cold Storage, attached to the Swift and Sons’ space, offers appetizers, entrees, and a nice-looking seafood station along with a full bar.

Eataly Chicago is dedicated to providing a full schedule of educational programs around food and wine. A recent event featured wines by Prunotto, the Antinori family’s picturesque wine estate among the Langhe hills of the Piemonte region of Italy (located in the southern section of the cuff of the Italian boot-shaped land mass).

Signor Emanuele Baldi, representing the brand, said Prunotto made the Italian wine map after the Antinori family, with 600 years of wine-making fame in Tuscany and Umbria, turned its attention to Piemonte (aka/Piedmont). He presented a small array of tannic reds from the area: Barbera, Barbaresco, and Barolo, all paired with complimentary dishes from the chef at Eataly’s cucina.

First course, served with the Barbera and the Barbaresco wines was Vitello tonnato—melt-in-your-mouth-tender, palest-pink poached veal with a smooth, creamy tuna and caper sauce—delightful, light and piquant with a drizzle of fresh lemon to set it off. The second course consisted of a platter of salumi and formaggi, tidbits of succulent preserved meats and rich, smooth cheeses also from the

Piemonte region.  He pointed out that eating any blue cheese with tannic wines is always problematical; the only cheese, he said, that can reliably go with almost any wine is classic Parmigiano. The third course was a beautiful nest of egg-rich noodles covered in a butter sauce perfumed with white truffle essence. Delicious.

The Barbera Pian Romualdo D’alba DOC 2012 with a ruby a color was representative of the high acidity of this variety of grapes as grown here in clay soils layered with sand and seashells. Here, these grapes  tend to produce wines that are fresh-tasting with more fruit and more acidity. This particular wine improved with time after opening, gradually smoothing out some of what many Americans would perceive as sharpness.

The two Barbaresco wines, both DOCG appellations (the highest designation in Italian winemaking), included Prunotto Barbaresco 2011 and Prunotto Bric Turot 2008. Each had a beautiful garnet color which he said they would always have, no matter how long you age them. They show more delicate floral than fruit and are considered more feminine and are made with Nebbiolo grapes,  grown only in Piemonte. Wines made with Nebbiolo grapes show elegance and finesse similar to what Americans find in Pinot Noir varietals. Good with pasta, stewed meat, roast duck and others.

The two Barolo wines, both also DOCG appellations, included Prunotto Barolo Classic 2009, and Prunotto Bassia Barolo 2008. These two, also made with Nebbiolo grapes, were the deepest and richest wines of the evening. The presenter described them as more muscular, with higher tannins and greater structure, not unlike Cabernet Sauvignon wines from America. Excellent paired with the rich, buttery noodle dish. Each of these is a perfect companion to a variety of salumi, meats and cheeses.

It was a pleasure to hear the presenter give a famous Italian maxim, “The best wine is the one whose bottle is empty first.” So, if you’re one who says,  “Hey, I just know what I like,” that means your opinion matters as much as any expert’s.

By the way, their website is surprisingly easy to use. For more information, visit the Prunotto website.

How do you judge the excellence of a steakhouse? Quality of the meat, certainly. The sides matter, of course. But in some cases, more than the food sets one place above another – ambience, wine pairings and service.

That’s where David Burke’s Primehouse, located in The James Hotel at 616 N. Rush St. , stands out. If all the wait staff are as knowledgeable and attentive as was Bryan, our server on a recent visit, this place gets nearly five stars. Plus the wines they paired with our food were truly exceptional. The first one, for example, was a blend of their own vintages that rated a solid four stars.

Primehouse occasionally offers a prix fixe menu with wine pairings at an attractive price compared to ordering a la carte. Once you review the regular menu and look at what you would have been paying, you realize just how attractive the package is.

At any rate, the Primehouse folks select the menu to showcase some of their most popular items. The appetizer, Surf & Turf Dumplings, takes the prize for imaginative use of ordinary ingredients. Two little dumplings – really, deep-fried dough-covered-fillings-on-a-stick – come out beautifully displayed on a pair of square pristine-white plates – set off brilliantly by the restaurant’s subtle mood lighting.

And then comes the taste. Layer upon layer of flavor jumps out as you bite into each dumpling – one made with lobster and roasted lemon chutney, and the other with meltingly tender beef short rib meat seasoned with pickled red onion and spicy mustard. The dish was reminiscent of the finely wrought, multi-layered-flavors in certain Asian delicacies but with a distinctly North American weight to it.

Next came an arugula salad full of almost-bacony flavor from the house-smoked-over-applewood truffle tomatoes, set off with pine nuts and coated lightly with a creamy goat cheese fondue. Nice combo. Especially enjoyed the slight bitterness of the greens with the creamy smoothness of the dressing.

We were taken aback when Bryan delivered the next plate. Three very large chunks of seared, rare ahi tuna sat atop a vegetable mix consisting of preserved fennel, bell peppers, black olives and a few green beans. A more than generous serving of an intriguing combination, though not a favorite for either of us.

Next, the piece de resistance. The auxiliary server arrived with a large char-grilled steak. Bryan was concerned that it might be overdone (we’d requested one serving medium rare and one medium well). We appreciated that he asked to have it taken back so the chef could confirm it was properly cooked to order. While we waited, Bryan explained this is their most popular steak – the bone-in 55-day dry-aged ribeye, and that it hangs in their own dry-aging smokehouse for that many days before it’s sent to the grill.

The steak came back from the kitchen confirmed, and the auxiliary server carved it for us, first in half, and then in slices, giving each of us pieces that conformed to our wished-for doneness. Sides included an aluminum basket of French Fries seasoned with truffle oil and melted Asiago cheese, and a generous helping of Roasted Mushrooms seasoned with shallots, sherry vinegar and herbs and served in a sizzling oval skillet.  While none of these dishes reached beyond good, they were nicely prepared and flavorful.

Throughout the meal both Bryan and the sommelier kept us in generous tastes of the selected paired fine wines. Bryan was also kind enough to write out the list of wines for us:

I’ll be back when this fabulous special is available again.