It’s always a joy to have the winemakers of France come to Chicago, and particularly delightful to taste the wines of Bordeaux in our fair city. Vins de Bordeaux held a tasting at Virtue Restaurant in Hyde Park that proved especially enlightening and enjoyable. As with many grape-growing lands that depend on rivers, two of them – River Garonne and the Dordogne – flow through Bordeaux. One way to categorize their red wines is to note that those from the Left Bank tend to blend more with Merlot, while wines from the Right Bank tend to blend more with Cabernet Sauvignon.

Bordeaux wines come from 65 different appellations, many of  which you’ll recognize: Cotes de Bordeaux (“cotes” denotes hillsides that overlook the right banks of the Garonne and the Dordogne Rivers), Saint-Emilion, Pomerol & Fronsac, Medoc and Graves. The region produces dry whites (11% of their production) that are fresh and vibrant with good natural acidity. Bordeaux sweet whites are made from grapes affected by botrytis. They’re medium- to full-bodied and are produced mainly in Sauternes and Barsac in the southern part of Bordeaux.

By the way, if you’re ever confused about Bordeaux and Burgundy, read this from the Wine Spectator for a down-to-earth explanation. Below are a few of the many they showcased in Chicago in 2019:
WHITES
Chateau Petit-Freylong, Cuvee Izzy 2015. Rich, stone fruit bubbly from Bordeaux made from early-picked Sauvignon Blanc, this was 5-star all the way. Importer: Sweiss Group, LLC. SPR ~$22.
Chateau de sours, La Source Blanc 2011. This blend of 80% Sauvignon Blanc and 20% Semillon will please nearly anyone. SRP $35.
REDS
Domaines Baron de Rothschild (Lafite), Legende 2012. Beautiful blend of 70% Cabernet Sauvignon and the rest Merlot. Imported by Esprit du Vin. SRP $49.99
Chateau Lafitte Laujac 2011. Made from grapes grown in very well drained soils in the Medoc region, this one spent a full year in barrels. 60% Cabernet, 35% Merlot, 5% Petit Verdot. Lovely.
ROSÉS
Chateau Maurac 2012. Blended from Cabernet and Merlot from the Haut-Medoc area and imported by Michael Corso Selections. SRP $29.99.
Chateau de Sours, Reserve de Sours sparkling Rosé. A lovely sparkling wine from Bordeaux made of 87% Merlot and 13% Cabernet and imported by Old Bridge Cellars. SRP ~$20.
For more information about the Bordeaux wine regions, read here. 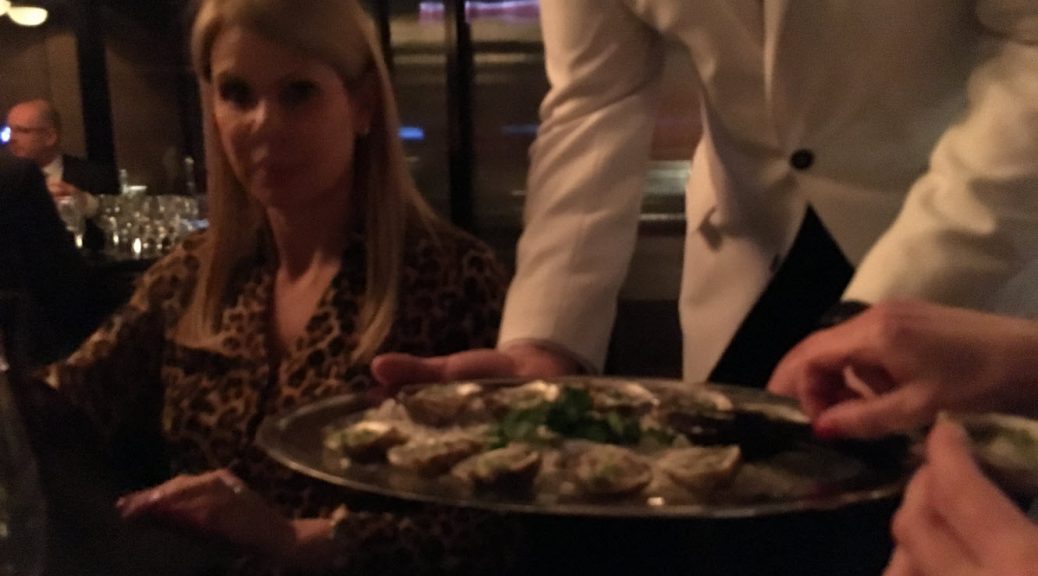 Last week was a great time for Bordeaux in Chicago. Dozens of winemakers and representatives from dozens of appellations in the Bordeaux, France wine region converged in one of the ballrooms at the elegant historic Drake Hotel to introduce their mainly 2014 vintages to press, trade and the public. Visitors walked around tasting while, behind the tables, reps from members of the Union des Grands Crus de Bordeaux gave out pour after pour of mostly red blends, plus a few whites and Sauternes for good measure. As you read my recommendations, keep in mind I’m partial to big, dry, complex reds.

A few of my favorites came from a region I hadn’t previously been very familiar with, Saint-Estephe, and included all four of the wineries present from there (check links for wine notes and prices): Château Ormes de Pez 2014, Château Cos Labory 2014, Château Phelan Segur 2014, and especially Château Lafon-Rochet 2014.

Others that I gave highest marks to were from among the Grand Crus de St. Emilion and included Château Beau-Séjour Bécot 2014, Château Canon-La-Gaffelière 2014, Château Grand Mayne 2014, and Château Villemaurine 2014. Really beautiful wines.

I was also impressed with some from the Pomerol appellation of Bordeaux. Check out Château Beauregard 2014, Château Clinet 2014 and Château La Cabanne 2014. Two notables from the Pessac-Leognan appellation were Chateau Olivier and Chateau Smith Haut Lafitte, each of which presented both a white and a red.

And later that evening, a fine wine dinner at RPM Steak House featured 5 lovely wines from the Pouillac appellation in Bordeaux – food and drink to set the imagination afire. Amuse bouches were tiny and flavorful, including oysters with mignonette. The appetizer course was a generous-sized disk of Hamachi, studded with caviar and surrounded by a warm, slightly sweet yuzu emulsion. First course was an outstanding Pepper-Crusted Tuna Belly – one piece of which was prepared confit (NUM!) and the other ahi-style, both served with a spoonful of sturdy mushroom Bearnaise. Utterly succulent and delicious and perfect with a Bordeaux blend, Les Tourelle de Longueville, Pauillac 2011.

Next came Prime Dry Aged Beef – two small pieces of beef aged 90 days and two aged for 9 days. Both were spectacular and were served with two vintages of Chateau Pichon Longueville Baron Pauillac, one from 1990 and one from 2009. Lovely, rich reds.

Then came, not one but two desserts, both outstanding. One, poached apricots served in a warm almond custard that was to die for (I am wild about anything custard), and then a Sticky Toffee Pudding with rum raisin ice cream, both served with Chateau de Suduiraut Sauternes, one from 2004 and the other from 1975. Beautiful, beautiful. Thank you, RPM and thank you, makers of Bordeaux wines par excellence. (And thanks to Elizabeth for some nice shots!)